WOLFSBURG: German car giant Volkswagen said Friday it would plough 60 billion euros ($66bn) by 2024 into its switch to electric, hybrid and connected vehicles, as automakers around the world rev up electrification plans.

The sum is an increase of 16bn euros over previously-announced investments.

In a plan approved by its supervisory board, VW also said it would introduce up to 75 all-electric models and around 60 hybrid vehicles over the next decade, compared with a total of 70 across both types that were already planned.

VW is “focusing our investments on the future of mobility,” chairman Dieter Poetsch said in a statement.ARTICLE CONTINUES AFTER AD

“Without electric mobility, we won’t be able to win the battle against climate change,” added chief executive Herbert Diess.

The group said it was planning to sell 26 million all-electric vehicles by 2029 as well as around six million hybrid vehicles by that time, hoping they will help hit new European carbon dioxide (CO2) emissions targets.

On top of that should come around six million hybrids.

From next year, carmakers must achieve average carbon dioxide (CO2) emissions of 95 grammes per kilometre across newly-sold vehicles in the European Union, on pain of hefty fines.

“We will meet the strictest European limits from 2020,” Diess said.

VW has made a bigger bet than competitors on all-electric cars, designing a battery-powered platform known as “MEB” that will form the basis for a whole range of vehicles, beginning with the mass-market “ID.3”.

Of the 29m electric vehicle sales VW is targeting over the coming decade, 20m will be from MEB-based vehicles.

VW’s strategy apes Californian electric pioneer Tesla, which announced this week it plans its first European factory for a site just outside Berlin.

At other traditional manufacturers, platforms — which include the chassis and various invisible components that are shared across different models — are set to remain flexible for different fuel options.

Meanwhile VW will have to spend big to transform existing factories to produce electric cars — five in Germany, one in the US, one in the Czech Republic and two in China.

The group’s electric push was given fresh momentum as it attempted to turn the page on its “dieselgate” scandal, which cost it dear in both cash and reputational harm.

Legal cases grind on over VW’s admission four years ago that it illegally fitted 11m diesel vehicles worldwide with software to make them appear less polluting.

On top of the electric push, CEO Diess said that “in light of the worsening economic situation, we are also working on increasing our productivity, our efficiency and our cost base so as to secure meeting our targets.” VW last month said it was confident of hitting financial targets despite a lower unit sales outlook, warning that “vehicle markets will contract faster than previously anticipated in many regions”.

A global growth slowdown triggered by trade wars and Brexit uncertainty has hit the car industry particularly hard, as have the mammoth costs associated with switching to electric car production. 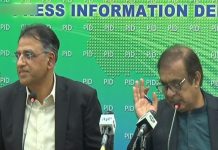 Govt will take all possible measures to ensure transparency in Senate...