LAHORE: The Lahore High Court on Wednesday dismissed the bail application filed by Jang/Geo Media Group Editor-in-Chief Mir Shakil-ur-Rahman, thereby allowing his continued arrest without a formal trial in a case relating to a property transaction that took place 34 years ago.

In today’s hearing, MSR’s advocate Amjad Pervez had completed his arguments for the allowance of bail, highlighting that, despite the flimsy and concocted nature of the case, MSR had continued cooperating with the investigation and presents no risk due to which bail can be denied.

The NAB prosecutor, too, presented his arguments, after which the court recessed for 10 minutes before the judgement to deny bail was announced.

In the previous hearing a day earlier, MSR’s lawyer Pervez had argued that MSR had in fact been arrested for criticising the incumbent regime.

Dismantling the grounds on which the case was formed, he said that the Punjab government had, nearly 34 years ago, provided an exemption on 54 plots in accordance with the law, from which MSR had also benefited. Parvez said that the prosecution had investigated MSR and had obtained nothing from him that would suggest that any undue favour was given to him.

MSR’s lawyer said that the Mukhtar Alam property was registered on May 22, 1983 and on June 4, 1986, the Jang/Geo Media Group Editor-in-Chief had requested the Lahore Development Authority for initial construction.

The lawyer further said that on July 22 of the same year, the director land development had issued a letter denying MSR’s request.

“The suspect had paid all [outstanding] dues by August 5, 1986,” Pervez informed the court.

“From 1986-2019, the LDA was silent. After that, it filed a case [against Mir Shakil-ur-Rahman],” stated Pervez. “The real owners of the plot never complained.”

He said that the LDA had never shown any concern or complained about the exemption granted to MSR and his power of attorney.

“The LDA didn’t even become a plaintiff in the case,” he noted, adding that his client had appeared before NAB Lahore and submitted all documents pertaining to the case.

The lawyer said that a reference had nonetheless been filed against his client in which it had been stated that he had caused a loss of Rs143mn to the national exchequer and had been accused of violating the land exemption policy.

He said that the NAB chairman was not even the relevant authority to issue MSR’s arrest warrants, adding that there was no evidence that the veteran journalist had sought any personal benefit from any public office holder. 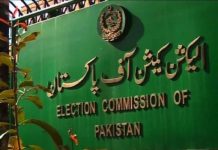 FBR to Bring Private Schools Under the Tax Net

PIA expects to resume direct flights to US from May