PESHAWAR: Adviser to the Khyber Pakhtunkhwa Chief Minister on Information Ajmal Wazir was removed from his post, a notification from the provincial government said on Saturday, in a move that he claimed was a “well-planned conspiracy” against him.

Kamran Khan Bangash has been given the additional charge of the portfolio of Information and Public Relations in addition to his office of Special Assistant to the Chief Minister on Local Government, Elections and Rural Development.

According to the government notification, Wazir was “relieved and denotified” with Bangash given the additional responsibility in his stead.

The development came as Wazir was accused of accepting a commission from an advertising agency after a leaked audio recording surfaced. An inquiry into the allegations has been ordered by the KP chief minister.

“Chief Minister Khyber Pakhtunkhwa has desired to process a case for a fact-finding inquiry into the recently surfaced audiotape of Ajmal Khan Wazir, former advisor to the chief minister for information and public relation,” a government statement said.

Earlier, Geo News had reported Wazir was resigning from his post due to personal reasons.

“I am unable to dispense my duties as the information adviser, therefore I am resigning from my post,” Wazir had said.

Wazir said he had already sent his resignation to Chief Minister Mahmood Khan.

Wazir was appointed as the adviser to the chief minister for information earlier this year.  Wazir, who belongs to Shakai valley in South Waziristan, had joined the Pakistan Tehreek-e-Insaf just before the July 2018 general elections. He was earlier a member of the Pakistan Muslim League-Quaid and had remained its central vice-president.

Later in the day, responding to the development, Wazir said that he had been targeted in a “well-planned conspiracy”.

“This is a conspiracy against me. The conspirators have used a vile method to block my way,” said the former information adviser.

He said he will face the charges head-on as it is the prime minister’s vision to hold anyone and everyone accountable and when there are allegations against someone, they must respond to them.

Wazir said that audio clips from various briefings had been cut and stitched together to produce the fabricated audio clip.

“I have nothing to do with the issue on which I am being criticised,” he said.

“The advertisement was for the health department, which is chaired by the health minister. I was an honorary member of the committee and I had no authority to make a decision.”

“A provincial government is the trustee of the people’s confidence and resources,” he said.

He said an inquiry into the allegations has already begun and soon its findings will be made public.

Pakistan hands over body of Indian BSF soldier who drowned while... 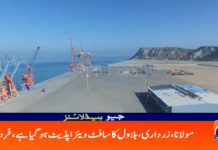 Claims and counterclaims as govt, PML-N spat on ‘NRO’ continues