Prime Minister Imran Khan on Tuesday said that the PTI’s 24-year-long struggle has not yet ended and much work remains to be done for the uplift of the lesser privileged sections of society.

The prime minister’s remarks came as he chaired a meeting of the federal cabinet to consider a number of important agenda items.

Upon arrival in the meeting, the prime minister was warmly greeted by the cabinet members who thumped their desks in tribute to him.

According to the Prime Minister Office’s media wing, the cabinet members highly appreciated the prime minister for his dynamic leadership that successfully countered the internal and external challenges during the last two years of the government.

As he addressed the meeting, the prime minister said that his priority is to provide relief to the people. He expressed the hope that an improvement in all sectors of the economy will soon be witnessed as a results of reforms.

“No matter how tough the times, we must never abandon the people,” he said, adding: “To think of and work for the lesser privileged is the true test of our faith.”

He said that he wanted to put into practice the concept of the welfare state of Madina and the concept will be included in the curriculum. Speaking further about the new educational curriculum, he said that at the beginning, it will be prepared for the eighth and ninth grades.

The prime minister instructed the cabinet to take immediate steps to reduce inflation.

According to sources privy to the meeting, the cabinet approved the addition of two new members to the inquiry commission formed to probe the petrol crisis. It also approved the immediate enforcement of the Services Act on Pakistan Television employees.

The meeting discussed in detail the economic and diplomatic achievements of the government and reviewed the political situation in the country.

In a tweet, the minister stated that these were the last items in the list of Personal Protective Equipments (PPEs) that were earlier banned for export.

Hussain said when the first COVID-19 case appeared in Pakistan on February 26, we were importing all PPE items.

But, today, Pakistan has become a major exporter of COVID-19 related items, he added. 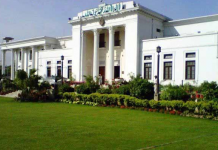 Govt willing to restore student unions after establishment of ‘code of...

Media curbs on absconders, convicts in the offing