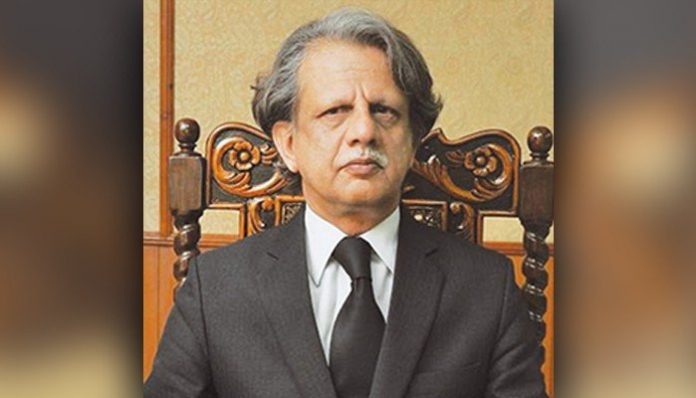 The commission formed to probe the Broadsheet scandal has released its findings, with a key takeaway being that all institutions except for NAB were found to have resisted cooperating with the investigation.

Headed by retired Justice Sheikh Azmat Saeed, the commission has also stated in its report that Broadsheet’s records were missing from “nearly everywhere”, including the Pakistan mission in London.

Additionally, the report states that the chairman of the commission (Justice Saeed) did not think it necessary to record Tariq Fawad Malik and Broadsheet CEO Kaveh Moussavi’s statements.

According to the report, the asset recovery deal made with Broadsheet makes evident the government institutions’ failure to comprehend international laws.

It said that the bureaucracy made every attempt to “hide records or make them disappear”, in moves that were in many instances “transcontinental”.

The report states that Moussavi, who is a convicted felon, levelled allegations against certain individuals but probing this matter did not fall under the terms of reference defined for the commission. It added that the government may probe the Broadsheet CEO’s allegations if it wishes to.

According to the report, a settlement deal was made with Broadsheet to pay it $2.2 million.

What the government officials involved in making the settlement deal were unaware of at the time, was that there are two firms — based in Gibraltar and Colorado — that have no link with the real Broadsheet, based in the Isle of Man, UK, and with whom settlement deals were inked.

International law expert and former federal law minister Ahmer Bilal Soofi had contacted Jerry James, who was erroneously believed to be the Broadsheet chairman, when in fact he was associated with the Colorado firm.

It notes that $1.8 million in two instalments were paid in May 2008 to James in the presence of Abdul Basit who was Pakistan’s envoy in London at the time. Shahid Baig, an officer of the Pakistan High Commission had signed both cheques for payment.

Baig, in his statement to the commission stated that no approval from the Pakistan government was sought for payment made to Broadsheet (Colorado).

Meanwhile, secretary law Raja Naeem told the commission that all settlement records had been stolen from the ministry.

Then NAB chairman Naveed Ahsan was also involved in making the settlement deal.

Ahsan, in his statement to the commission, said that Soofi had not disclosed any information regarding the deal made with James.

Furthermore, then NAB officer Hassan Saqib Sheikh was also involved in the deal.

The first settlement deal was made with Broadsheet (Gibraltar) whereas Pakistan had never approached such a company, the report states.

The commission also raised several questions regarding the role of judge Kaleem Khan who was attached to the ministry of law at the time.

The report notes that the prime minister at the time, Shaukat Aziz, had given approval for this settlement with Broadsheet. A cabinet summary with the approval dated May 10, 2007 has been reference by the report.

No officer, whether from the law ministry, the Pakistan High Commission in London or the Foreign Office, the Ministry for Finance or NAB even had the remotest idea that Pakistan is being cheated.

Minister for Science and Technology Fawad Chaudhry, delivering a post-cabinet meeting media briefing, said that the federal cabinet has decided to pursue criminal proceedings against five individuals named in the report based on the recommendations by the Broadsheet probe commission.

These include Ahmer Bilal Soofi; Hassan Saqib Shaikh, who is currently working with the Federal Board of Revenue (FBR); Ghulam Rasool, who was the joint secretary of the ministry of law; Abdul Basit, who was the deputy high commissioner to the UK; Shahid Ali Baig, who was the director audit and accounts for the High Commission in London; and Tariq Fawad Malik, the person “who facilitated the whole contract with Broadsheet”.

Chaudhry said that the commission has declared these five individuals the “main accused”.

“Another important point raised by the commission is that NAB saw the darkest period between 2011-2017 […] you know that Qamaruz Zaman was the NAB chairman at the time,” the minister said.

He added that owing to the “criminal negligence” of the prosecutor generals and other people, “records related to Swiss accounts and other documents disappeared and no one even knew”.

Chaudhry said that according to the commission’s recommendations, Qamar Zaman and other high ranked officials of NAB will be probed and their “criminal liability” ascertained.

The minister said that if one recalls, PPP President Asif Ali Zardari and other party members were acquitted in several cases in that period, because it was said that NAB does not have the original records for the Swiss accounts, “which was all a pack of lies”.

“We are thankful to Justice Azmat Saeed who discovered the original record of the Swiss accounts […] now on this basis, we will pursue action in the matter against Zardari. Our legal team is reviewing the matter.”

“Destroying or hiding records is a criminal offence so legal action will be taken against the director general NAB, prosecutor general and others involved,” Chaudhry added.

Broadsheet LLC was hired by the National Accountability Bureau during Pervez Musharraf’s government in 1999 to trace assets in the UK and USA belonging to more than 200 Pakistanis (called “targets” in the contract) including generals, politicians, and businessmen — Benazir Bhutto, Asif Ali Zardari, and Nawaz Sharif being among the chief targets.

After NAB abruptly ended its contract with Broadsheet in 2003, in violation of the terms and conditions, the asset recovery firm began pursuing legal action against the bureau. The bureau was subsequently ordered by a London court to pay for damages, liabilities, and interest accrued.

PM Imran Khan had taken notice of the Broadsheet scandal after court documents revealed that Pakistan’s anti-graft watchdog had made a deliberate decision to disregard financial damages that may be caused to the asset recovery firm by entering into a settlement with an unauthorised individual and paid around $1.5 million to a fake firm. The premier had thus ordered the formation of a commission to probe the matter.

The arbitration court in London that heard the case — Broadsheet LLC vs. The Islamic Republic of Pakistan and the National Accountability Bureau — was chaired by Sir Anthony Evans. The court’s ruling titled Part Final Award (Liability issues) was handed down in August 2016 under the Chartered Institute of Arbitrators, Case No. 12912001.

The case details the whole saga from the NAB’s establishment to the signing and — three years later — rescinding the agreement with Broadsheet, a breach of contract, illegal payments from Pakistan to wrong entities; and all that led the court to ascertain that the anti-corruption body was involved in intentional wrongdoings.

Judgment documents had revealed what the arbitration court concluded, that the claimant — Broadsheet LLC — was entitled to recover damages from the respondents — the Islamic Republic of Pakistan and the NAB — for the “tort of conspiring to cause unlawful economic loss to the Claimant by entering into the Settlement Agreement dated 20 May 2008 with Mr. James and companies controlled by him and/or in making payments to him or them thereunder”.

Subsequently, the London High Court’s Financial Division issued on December 17, 2020, a Final Third Party Order for payment to Broadsheet by December 30, 2020 — drawing the curtains on a case that has cost Pakistani taxpayers billions of rupees.

Pakistan then made a payment of $28.706 million (Rs4.59 billion) to the British firm after losing long-running litigation at the London High Court.