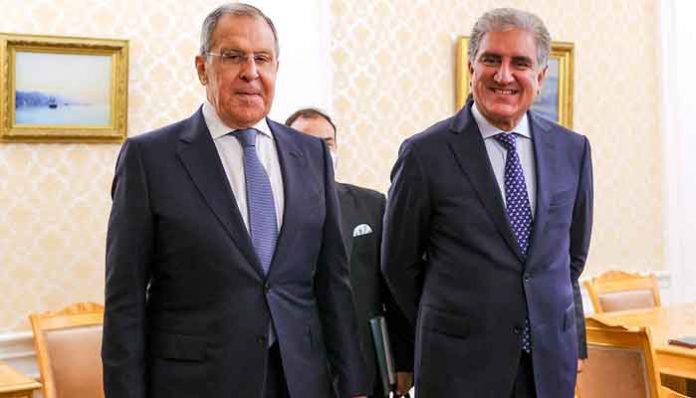 This will be the first visit of a Russian foreign minister since 2012.

In a video message earlier today, Foreign Minister Shah Mahmood Qureshi said bilateral relations between Pakistan and Russia are taking a new turn and improving in the fields of economy and defence.

He said both the countries desire promoting cooperation in the region and want to take forward the North-South Gas pipeline project.

Qureshi said that discussions will be held with his Russian counterpart on the promotion of trade.

The foreign minister added that the two countries are playing their role in the Afghan peace process.

FM Qureshi will himself receive the Russian leader at the airport “in a sign of growing cooperation between the two countries across a wide range of areas of common interest”.

In a statement on Monday, the Foreign Office said the Russian foreign minister besides holding delegation-level talks with his Pakistani counterpart Shah Mahmood Qureshi, will also call on Prime Minister Imran Khan and have interaction with other dignitaries.

During the talks between the two foreign ministers, the entire gamut of Pakistan-Russia relations will be reviewed and ways discussed to further broaden and deepen bilateral cooperation in diverse fields. They will also exchange views on regional and international issues.

Sergey Lavrov’s visit is part of the growing interaction and regular high-level exchanges between Pakistan and Russia.

Abdullah Siddiqui becomes latest Pakistani to make it to Forbes 30...