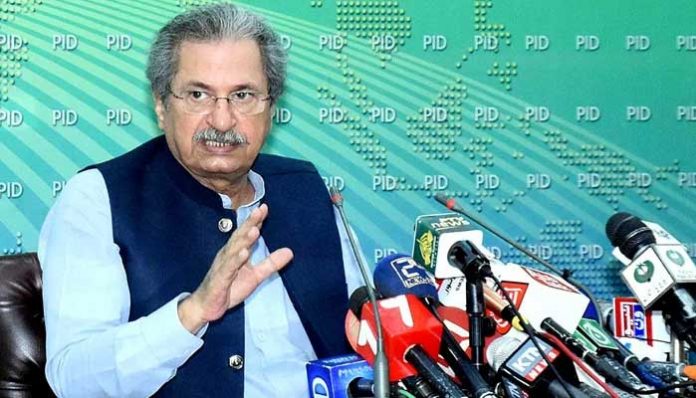 The Federal Minister for Education and Professional Training Shafqat Mehmood on Wednesday evening took to his Twitter account and sent a motivational message to students.

The minister asked students to work hard to have a bright future and discouraged them from looking for shortcuts as such routes lead nowhere.

“There is a time in life to study and prepare for challenges of the future. And then a time to enjoy [the] fruits of this labour for the remaining years,” the minister wrote.

The minister then advised students to refrain from malpractices as they do not hold any benefits in the long run.

“No one has achieved anything significant in life without hard work. Looking for shortcuts or free passes is a road to nowhere,” he wrote.

A day prior, Shafqat Mehmood had announced that on-campus classes for students till grade 8, in districts affected the most by the coronavirus, will remain suspended till April 28.

While holding a press briefing, the minister said the decision was taken after holding an important meeting at the National Command and Operation Centre (NCOC), which was attended by all the education and health ministers.

“It has been decided that physical classes will not be held from grades 1-8 till April 28 in districts affected by the coronavirus pandemic,” said Mehmood. “It must be borne in mind that not every district in Pakistan has been affected by [the] coronavirus.”

He had said the education minister of Punjab had informed him that 13 districts across the province were affected by the coronavirus, hence on-campus classes will not be held there till April 28.

He added that the Sindh government had already announced its decision of suspending on-campus classes from grades 1-8 and the Khyber Pakhtunkhwa had done the same.

The minister had also said consultations will be held whether these on-campus classes will remain suspended till Eid or whether they should be resumed “in some staggered way”.

He said classes of grades 9, 10, 11 and 12 will be held under strict compliance of coronavirus SOPs from April 19 onwards, so that these students can complete their preparation for their upcoming exams.

“Universities in affected districts will also remain closed and classes will be held online,” he said, adding that in other districts, universities will remain open and function as normal.