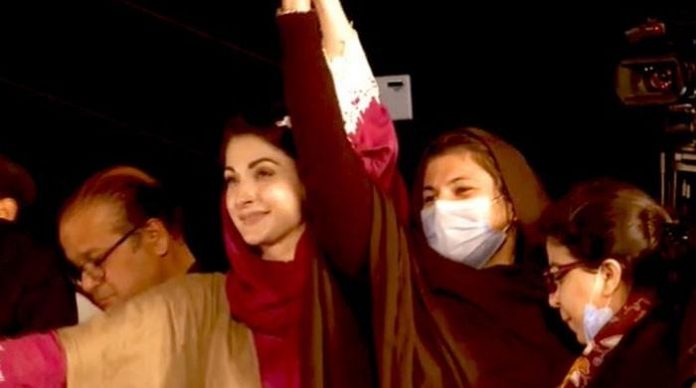 KARACHI: In an upset for the ruling PTI, its candidate Ali Asjad Malhi lost the hotly-contested NA-75 seat to PML-N’s Nosheen Iftikhar on Saturday.

The by election in the Sialkot constituency had gained national importance after a by-poll in the same constituency on February 19 this year was declared void by the Election Commission of Pakistan (ECP) due to multiple incidents of violence and serious irregularities.

Following controversy, the ECP had ordered a re-election in NA-75. The PTI candidate had, however, challenged the ECP order in the Supreme Court, but the petition was dismissed on April 2 and the apex court ordered that the poll be held on April 10 as per schedule.

According to provisional and unofficial results from all 360 polling stations, announced after midnight, at around 12:30am on Sunday, Iftikhar managed to secure 110,075 votes, whereas Malhi received 93,433.

Of the total votes cast, 1,702 were rejected as invalid.

As a sign of how fervent the campaigning for the seat had been, both the PML-N and the PTI did better compared to the 2018 election result – with the PML-N registering a 8% increase in votes and the PTI candidate getting 51% more votes despite a lower turnout (43.33% compared to 55.84% in 2018). The TLP actually did worse than before, registering a decline of 44% in the number of votes cast.

The first results from the election started being announced from 6:00pm, when the bar placed by the Election Commission of Pakistan on reporting of vote counts was relaxed.

Initial data from the constituency, based on provisional and unofficial results, showed PML-N candidate Nosheen Iftikhar taking an early lead against rival Ali Asjad Malhi of the PTI.

Barring a few accusations of ‘bogus voting’ and reservations against some presiding officers raised by Nosheen Iftikhar, the polling process had remained mostly uneventful earlier in the day.

PML-N Vice President Maryam Nawaz had also urged her party’s supporters to come out and vote.

Meanwhile, PTI’s Ali Asjad Malhi confidently claimed that his party would emerge victorious. He accused the PML-N of moving people from outside the constituency to NA-75 to disrupt the election process.

“They lost the last time, and will lose again this time,” he claimed.

Both candidates, however, expressed satisfaction with the overall arrangements for the by-polls.

Initial reports suggest that voter turnout remained low, particularly in rural areas in the constituency, which was expected to play in favour of the PML-N candidate.

The district monitoring officer had told the district police officer to prevent any MNAs and MPAs from entering the area, citing the election code of conduct.

The by election in the Sialkot constituency gained national importance after a by-poll in the same constituency on February 19 was declared void by the Election Commission of Pakistan (ECP) due to multiple incidents of violence and serious irregularities.

Following the controversy, the ECP had ordered a re-election in NA-75. The PTI candidate had, however, challenged the ECP order in the Supreme Court, but the petition was dismissed on April 2 and the apex court ordered that the poll be held on April 10 as per schedule.

The PML-N fielded Nosheen Iftikhar — daughter of the erstwhile elected MNA from the constituency, who passed away in August last year — while Ali Asjad Malhi was PTI’s candidate.

The ECP made elaborate security arrangements in the constituency to avoid any untoward situation like February 19, when two people were shot dead and six injured after violence ensued between the workers of PTI and PML-N.

The mysterious disappearance of 23 presiding officers (POs) and their turning up in the office of the district returning officer (DRO) after 13 hours had further blemished the credibility of the entire electoral process.

The difference between the votes of Iftikhar and Malhi in the aborted polls on February 19 was not very high, which suggested that a close fight had taken place.

More than 4,000 police officers and 1,048 Rangers personnel were also deployed in the area, while 10 teams of the Pakistan Army’s Quick Response Force are also available to assist the local administration in maintaining law and order.

Because of the short time left before polling after the Supreme Court’s judgment upholding the ECP decision of annulling the by-election, the competing challengers had not been able to campaign as hectically as they had before.

The candidates were also very careful so that they were not arraigned by the ECP for any violation of the code of conduct.

The ECP directed all the presiding officers (POs) to have smartphones so that they can be easily accessed and contacted.

Further, they were told to register any complaint with the DRO (deputy returning officer) or the Punjab election commissioner and promptly transmit the result to the designated authorities.

In the presence of polling agents of the candidates, the POs were to fill up Form 45 (the result count) and send its picture to the DRO. In case of any connectivity glitches, they were directed to physically take the Form 45 to the DRO and explain to him the problem they encountered.

Under the election rules, the result of the count was to be prepared in Form-45 and the PO was to put a copy of it in Packet-16 labelled ‘Result of the Count’.

The PO was also to prepare gender-segregated statements of voters on Form-45 as required on the basis of male and female voters scored out from the electoral rolls in the relevant polling booths.

A triangular fight was expected to take place in the by-election today, with the Tehreek-e-Labbaik Pakistan (TLP) candidate seen as a threat to the prospects of either the PML-N or the nominee of the ruling party.

The TLP representative has so far gone unnoticed and the impact of the votes polled by him in the last by-election have not been discussed as such. The focus has been on the two main competitors of PML-N and PTI.

Although most TLP ticket-holders have not won an NA seat, they had scored a good number of votes in many constituencies in the 2018 general elections.

The votes polled by the TLP representative in NA-75 will not matter much if the margin of victory of one of the two principal aspirants turns out to be large. However, these will have a significant impact in case of a meagre lead.

In the 2018 general elections, the TLP contender had bagged 14,801 votes. But the margin of the win for PML-N’s Syed Iftikharul Hassan was massive as he had secured 101,769 votes compared to Malhi’s (from PTI) tally of 61,727. However, at the time, an independent, who was an influential figure in the area, had clinched 57,769 votes.