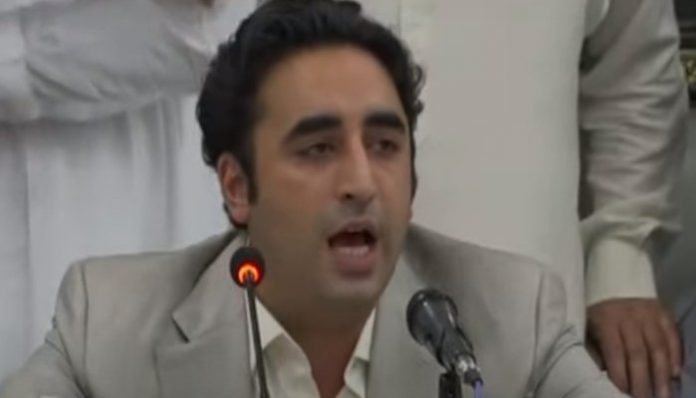 KARACHI: PPP chairperson Bilawal Bhutto Zardari on Monday announced that the party’s Central Executive Committee (CEC) has called upon its members to resign from all positions of the Pakistan Democratic Movement (PDM).

Flanked by party leaders, Bilawal held a news conference to speak about the matters that came under discussion during the recently-held Central Executive Committee meeting of the party.

He said the CEC had come to the conclusion that resignations from the national and provincial assemblies should be “like an atom bomb”.

Bilawal said the PPP’s stance that the Opposition should not “abandon the Parliament and the Senate battleground” had been vindicated.

He said if the PPP had listened to other political parties in the Opposition and boycotted the Senate elections and by-elections, then it would have harmed democracy.

“We did not give the PTI government an open field to form a two-thirds majority in the Senate,” he said, adding that the government lost on its “own pitch” when the PDM candidate won from the Nowshera by-election.

“We will not undermine these gains that the PPP has achieved after giving many sacrifices,” he said. “When the PML-N was in power, we protected the Parliament then and we will protect the Parliament today.”

He said those who wanted to resign from the Parliament, should do so.

“But, no one should try to impose their will or their dictation on any other political party,” he said. “And the Pakistan Peoples Party will continue in its firm, consistent Opposition to the selected government that has been ongoing since day one and has not broken for a single day,” stressed the PPP chairperson.

“The Pakistan Peoples Party rejects the so-called show-cause notice,” he said. “Politics is done with equality and respect,” he added.

“The PPP demands an unconditional apology to the ANP and to the PPP for this obnoxious attitude,” he said.

Bilawal said the PPP stands by the ANP and would not abandon them under any circumstances. “There is no concept of show-cause notices in democratic alliances,” he said.

“We condemn the politics of Opposition against members of the Opposition,” he said.

The PPP chairperson said his party’s doors were open for all other parties, adding that there should be a “working relationship” among them.

He spoke about the $500mn loan received by Pakistan from the IMF. “It [IMF deal] consistently targets the poor people of Pakistan,” he said, adding that the government is putting the burden on the shoulders of the poor.

“Neither the details of the PTI’s deal with the IMF have been shared with the people or their representatives,” he said. “Whatever knowledge we derived about is was due to the IMF’s documents,” he added.

He blamed the government for conducting “a historic attack” on the country’s economic independence, saying that through the draft State Bank of Pakistan ordinance that the Centre wanted to be passed, the government was ensuring that the central bank does not answer to the country.

“The PPP’s Central Executive Committee rejects it [the ordinance] and we will, even in Ramadan, start a campaign against this PTI-IMF deal,” he said.

The PPP chairperson said the government’s policy on the contentious Kashmir issue was “contradictory and confusing”. He said it was the obligation of the government to represent and be the voice of the oppressed Kashmiris in their time of need.

He said the BJP’s manifesto spoke about annexing occupied Kashmir. “Despite that, during India’s election campaign, the prime minister of Pakistan said if Modi wins, only then the issue of Kashmir will be solved,” Bilawal stressed.

The PPP chairperson said “history will remmeber” this sentence by PM Imran Khan.

“History will remember there was a prime minister who was this inept and a failure on this issue,” he lashed out at the premier.

Bilawal lamented PM Imran Khan had reacted to India’s illegal August 5 move by saying: “What can I do?”

“And all of a sudden Imran Khan remembered that Modi, for whom he campaigned during the entire elections, was a fascist,” he said, mocking the prime minister.

“He [Imran Khan] says at times that he is the ambassador of Kashmir but then acts as Kulbhushan Jadhav’s lawyer,” said the PPP chairperson.

Bilawal said “when a leader leads” the country by taking the Parliament and the people into confidence, then the country can tackle India and other powers in the world as well.

He said the PPP’s CEC had decided to take up the issues of occupied Kashmir through its Kashmir Action Committee time and again, adding that it was the party’s resolve to ensure the Parliament is taken on-board in matters concerning the masses.

He said it was on the basis of the results of the census that the country’s resources were distributed to provinces. Bilawal said the census 2017 were “de jure” results and not the “de jure” figures.

“It doesn’t count the people actually living there and consuming figures,” he said, adding that it was the PPP’s demand that the de facto results be included in the census.

He demanded the government discuss the census results during a joint session of the Parliament. “A transparent census is necessary to empower the people of Pakistan,” he said.