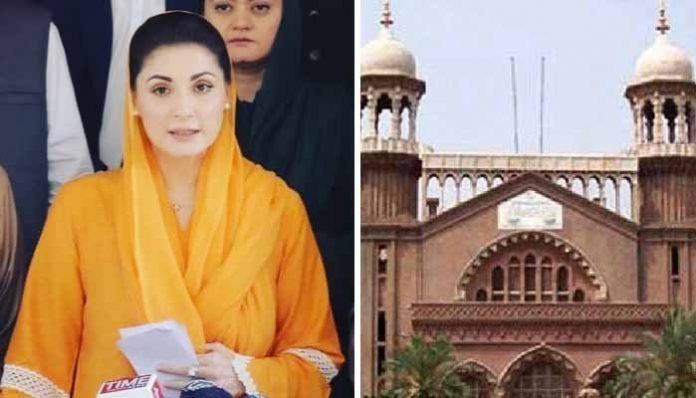 The PML-N vice president had appeared in court to attend a hearing of the Jati Umra case. A two-member bench of Justice Sardar Sarfaraz Dogar and Justice Asjad Javed Gheral heard the case.

“Have you issued arrest warrants [for Maryam Nawaz]?” asked the bench.

To this, the NAB special prosecutor responded saying the bureau had not done so. Maryam’s counsel, Advocate Azam Tarar, requested the court to restrain NAB from issuing his client’s arrest warrants without informing 10 days in advance.

The NAB prosecutor responded that the anti-graft body will inform Tarar in advance before the warrants are issued.

The bench told Tarar he can approach the court if the arrest warrants are issued.

In the call-up notice issued earlier, NAB had alleged that 1,500 kanals of land were illegally transferred to Maryam in Jati Umra with the help of the bureaucracy.

According to a NAB notification, the Sharif family had acquired 3,500 kanals of land in 2013 and got the master plan of Lahore changed in 2015 in connivance with relevant officials.

The then-DCO Noorul Ameen and former DG Lahore Development Authority Ahad Cheema have also been nominated in the case.

Last month, the LHC had approved protective bail of the PML-N vice president.

The anti-corruption watchdog had later approached the Lahore High Court for the cancellation of bail given to Maryam in the Chaudhry Sugar Mills case, but that request was rejected by the court.