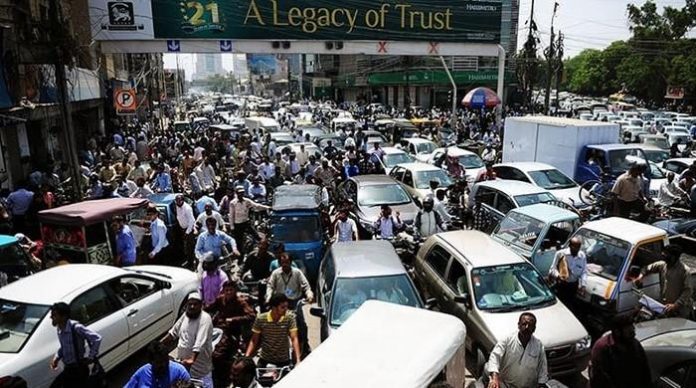 KARACHI/LAHORE/ISLAMABAD: Residents of various cities were stuck in traffic jams on Monday as a religious party held its protest in Karachi, Lahore, Islamabad, Rawalpindi, Multan and other cities.

Karachi’s II Chundrigar Road, MA Jinnah Road and their surrounding areas, including the road connecting Tower to the Governor House, was left jam packed with vehicles due to the protest.

Orangi Town number 4, Baldia number 4, Hub River Road, Liaquatabad and Korangi were some of the other areas where long queues of vehicles could be seen on roads.

Police dispersed protesters from Star Gate to allow the flow of traffic to return to normal.

Due to the prolonged protest, long queues of vehicles have been formed at Karachi’s Shahrah-e-Faisal. Reportedly, fuel in several cars has ended, leaving people travelling from offices to their house in a fix.

A Pakistan International Airline (PIA) flight, scheduled to fly from Karachi to Lahore, was also delayed as 40 passengers failed to reach the airport on time.

Meanwhile, a private company’s plane took off for Lahore from Karachi after an hour’s delay.

The staff of PIA’s plane schedule to fly to Dammam, Saudi Arabia, was also unable to reach the airport, sources added.

In Lahore, the traffic flow was disrupted in several areas such as Chohang and Multan road due to protests. Police fired tear gas shells to disperse protesters in the Yateem Khana Chowk area.

Meanwhile, traffic jams were also reported on the city’s Shahdara Road and on Ferozepur Road near the Shanghai Bridge.

In Islamabad, Athal Chowk was closed for traffic, causing problems for citizens. Protests also broke out in Bhara Kahu, while roads leading to Murree and Azad Kashmir from the federal capital were also blocked for traffic.

The entry points of the twin cities of Islamabad and Rawalpindi were also closed for traffic, leading to more problems for citizens of both cities.

The traffic at the Laiquat Bagh Chowk in Rawalpindi is severely affected. Earlier in the day, protesters pelted stones at buildings, causing fear and panic in the area.

Reports of protests from Jhelum, Naushahro Feroze and Multan were also received.

In Khuzdar, the flow of traffic at Quetta-Karachi Road has been affected as well.

Reacting to the development, Secretary Health Punjab Nabeel Awan said roads were blocked across Lahore, and as a result, there was a delay in medical supplies delivery to government hospitals.