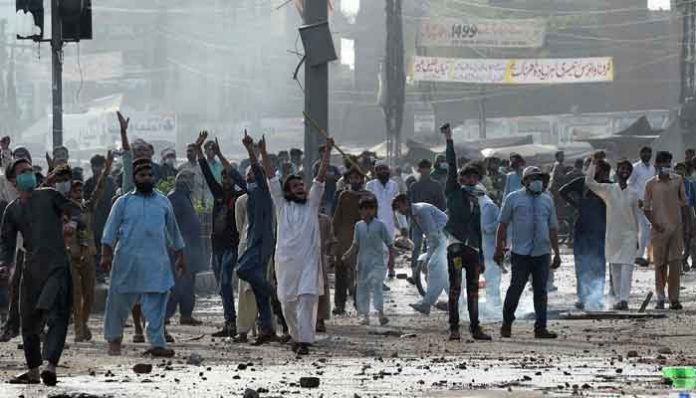 ISLAMABAD: Prime Minister Imran Khan and the federal cabinet approved a summary on Thursday from the interior ministry seeking a ban on the Tehreek-e-Labaik Pakistan (TLP) under the anti-terrorism law.

The Election Commission of Pakistan (ECP) will subsequently denotify the TLP on orders of the apex court.

Sources told Geo News all parliamentarians of the TLP will be automatically disqualified after the ECP denotifies the party.

In a major development on Wednesday, after days of violence across the country in which three people lost their lives, including two policemen, the federal government decided to ban the TLP.

Speaking to the media in Islamabad a day earlier, Interior Minister Sheikh Rashid Ahmed had said the ban on TLP will be placed under Section 11-B of the Anti-Terrorism Act 1997, on the recommendation of the Punjab government, and added that a summary for the ban has been moved to the federal cabinet.

“Today we have decided to ban TLP and we will get the approval of the cabinet,” the interior minister said.

He said several rounds of talks were held with TLP leaders, however, the party remained stuck to its stance. He said on the one hand they were talking, and on the other directing their workers to prepare for a march on Islamabad, with full force.

Later, Rashid also told a news channel that the decision to ban the party has the nod of all stakeholders and has been taken after thorough deliberations.

He said there were several other religious parties in the country, but none resorted to such violent behaviour. He said only in the past few years, the TLP has held several violent protests, bringing the entire country to a grinding halt.

He was optimistic that the ban on the TLP would be announced in the next few days after the cabinet gives it a go-ahead.

Rashid said no single political party can claim ownership to Namoos-e-Risalat, as he pointed that it was a matter close to the hearts of the entire 20 million people of this country. He said the government remained committed to table a bill on Namoos-e-Risalat in the National Assembly.

The minister said there was absolutely no question on the issue of “finality of prophethood (Khatam-e-Nabwat)” and no Muslim, including him, could even think of deviating from it, even at the cost of their lives.

$150 million budget for coronavirus vaccines can be increased: Asad Umar

At least 31 pilgrims dead in Karbala stampede on Ashura