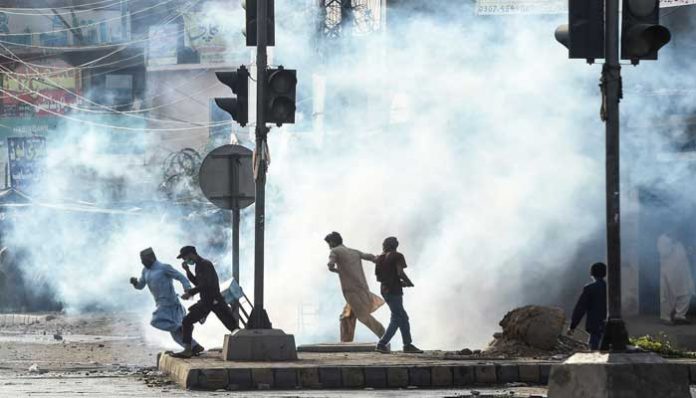 Chief of the banned Tehreek-e-Labbaik Pakistan (TLP) Muhammad Saad Rizvi has asked his followers to “immediately end all protests and road blockages”, according to Special Assistant to Prime Minister Imran Khan on Political Communication Shahbaz Gill.

A post on Twitter, which accompanied the caption “Hafiz Muhammad Saad Rizvi’s latest statement”, showed the photo of a hand-written note, dated April 15 (Thursday), and written purportedly by the TLP chief, who was taken into police custody four days ago.

“I, Hafiz Saad Rizvi, son of (late) Khadim Hussain Rizvi, with complete clarity of mind, and without any force, appeal to all the central leadership and workers of the Tehreek-e-Labbaik that in the interest of the nation and the public good, please do not take any illegal steps.

“All protest rallies and road blockages must immediately be brought to an end. All workers must disperse peacefully and head on to their respective homes and fully cooperate with law enforcement agencies,” reads the statement.

According to the statement, Rizvi also called upon supporters to end their sit-in outside Lahore’s Masjid Rehmatul Lil Alameen.

Gill’s post showing Rizvi’s appeal to his followers comes on the heels of the Ministry of Interior issuing a notification that the TLP has been declared a proscribed organisation after it caused considerable destruction in the wake of its three-day long nationwide protest.

According to the notification: “The federal government has reasonable grounds to believe that Tehreek Labbaik Pakistan is engaged in terrorism, acted in a manner prejudicial to the peace and security of the country, involved in creating anarchy in the country by intimidating the public, caused grievous bodily harm, hurt and death to the personnel of Law Enforcement Agencies and innocent by-standers, attacked civilians and officials, created wide-scale hurdles, threatened, abused and promoted hatred, vandalised and ransacked public and government properties including vehicles and caused arson, blocked essential health supplies to hospitals, and has used, threatened, coerced, intimidated, and overawed the government [and] the public and created sense of fear and insecurity in the society and the public at large.”

“Now, therefore, in exercise of the powers conferred by Section 11B(1) of the Anti-Terrorism Act, 1997, the Federal Government is pleased to list Tehreek Labbaik Pakistan in the First Schedule to the said Act as a proscribed organisation for the purposes of the said Act,” the notification added.

Reports of the government moving to freeze the organisation’s assets also came to the fore.

Sources told Geo News the passports and bank accounts of the central leadership of the TLP will be blocked, adding that such actions are being taken as per rule 11-E of the Anti-Terrorism Act 1997.

Arms licenses issued to the organisation’s leadership and workers will be suspended as well, said the sources. The State Bank of Pakistan and provincial revenue departments will play their role in freezing the assets of the banned organisation.

When these steps are taken, TLP members will not be able to buy or sell land and neither will they be able to access their bank accounts.

The government has, as per the sources, written to the relevant authorities in all four provinces to freeze the party’s assets.