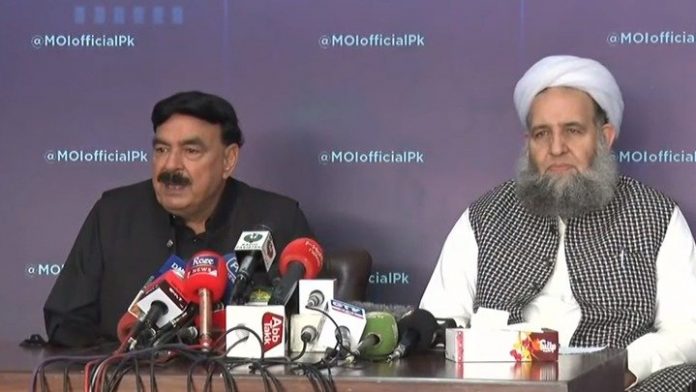 ISLAMABAD: Federal Interior Minister Sheikh Rasheed said Thursday that the designs of a religious party that recently held protests in various cities of Pakistan, were “dangerous”.

“They were adamant on coming [to the Faizabad Interchange] for the fourth time,” he said, referring to the religious party’s supporters. “This is why we took decisions to prevent that.”

The minister paid tribute to police officers and law enforcement personnel who got injured in the clashes.

Rasheed said the violence was unfortunate as the government was willing to negotiate with protesters. He said the government had not backed away from its promise to present a resolution of the religious party’s demands in Parliament.

“We got to know during the negotiations that they [religious party] were planning a march on April 20,” he said, adding that the reaction from the party after the arrest of a leader could not be justified.

“The reaction was neither in harmony with what our religion says nor what our Constitution says,” he said.

The minister said the cabinet has given its approval to ban the Tehreek-e-Labbaik Pakistan (TLP), adding that a summary to move the Supreme Court for the party’s dissolution will be sent tomorrow to the cabinet.

He said the government will not allow any relaxation to those who spread anarchy across Pakistan, adding that their agenda will not succeed.

“No one is being allowed to go, no relaxation will be provided to them,” he said.

Shortly after Rasheed’s press conference, a notification was issued by the Ministry of Interior declaring the TLP a proscribed organisation.

According to the notification: “The federal government has reasonable grounds to believe that Tehreek Labbaik Pakistan is engaged in terrorism, acted in a manner prejudicial to the peace and security of the country, involved in creating anarchy in the country by intimidating the public, caused grievous bodily harm, hurt and death to the personnel of Law Enforcement Agencies and innocent by-standers, attacked civilians and officials, created wide-scale hurdles, threatened, abused and promoted hatred, vandalised and ransacked public and government properties including vehicles and caused arson, blocked essential health supplies to hospitals, and has used, threatened, coerced, intimidated, and overawed the government [and] the public and created sense of fear and insecurity in the society and the public at large.”

“Now, therefore, in exercise of the powers conferred by Section 11B(1) of the Anti-Terrorism Act, 1997, the Federal Government is pleased to list Tehreek Labbaik Pakistan in the First Schedule to the said Act as a proscribed organisation for the purposes of the said Act,” the notification added.

The meeting discussed the country’s security situation, particularly in light of the protests organised by a religious party.

Participants of the meeting discussed the consequences that may arise after the government earlier imposed a ban on the religious party.

It was decided that a policy statement on the religious party and its protests will be issued in the evening.

Fawad Chaudhry took to Twitter to announce that Sheikh Rasheed and Religious Affairs Minister Noor-ul-Haq Qadri will hold a press conference at 4:15pm to issue the policy statement.

Earlier, PM Imran Khan and the federal cabinet approved a summary from the interior ministry seeking a ban on the Tehreek-e-Labaik Pakistan (TLP) under the anti-terrorism law.

The Election Commission of Pakistan (ECP) will subsequently denotify the TLP on orders of the apex court.

Sources told Geo News all parliamentarians of the TLP will be automatically disqualified after the ECP denotifies the party.

In a major development on Wednesday, after days of violence across the country in which three people lost their lives, including two policemen, the federal government decided to ban the TLP.

Speaking to the media in Islamabad a day earlier, Interior Minister Sheikh Rashid Ahmed had said the ban on TLP will be placed under Section 11-B of the Anti-Terrorism Act 1997, on the recommendation of the Punjab government, and added that a summary for the ban has been moved to the federal cabinet.

“Today we have decided to ban TLP and we will get the approval of the cabinet,” the interior minister had said.