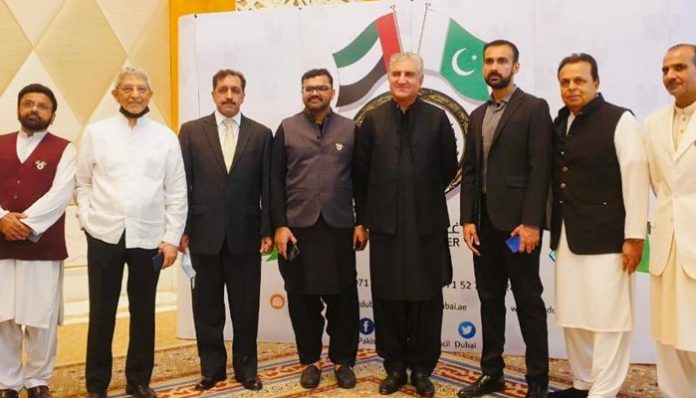 Speaking at dinner hosted by Pakistan Business Council Dubai, he said it was a matter of satisfaction that despite the ill effects of the global coronavirus pandemic, Pakistan through its economic diplomacy had achieved positive results.

He said Pakistan and the United Arab Emirates had improved their bilateral relations in diverse fields including trade.

The aim of his visit to Dubai is to promote trade relations between Pakistan and the United Arab Emirates in multiple fields, he added.

The foreign minister said a large number of Pakistanis were living in the UAE and through their hard work and dedication were playing an important role in the development and progress of the gulf state.

The priority of the PTI-led government is to resolve issues of the overseas Pakistanis and work for their welfare and well-being, he added.

Earlier, on his arrival, the foreign minister was received by the president and other representatives of the Pakistan Business Council.

The foreign minister earlier landed in the middle-eastern country for a three-day visit and upon arrival at the Dubai airport, was received by the senior officials of the UAE foreign ministry and Pakistan’s ambassador in UAE.

During his visit, the foreign minister will meet his counterpart Sheikh Abdullah bin Zayed Al Nahyan and other UAE dignitaries.

The foreign minister is set to hold consultations with the UAE’s leadership on all areas of bilateral cooperation including collaboration in trade and investment, job opportunities for the Pakistani workforce, and the welfare of the Pakistani diaspora.